This method refers to the identification of the temperature of a surface with the colour of the radiation emitted. The optical pyrometer compares the brightness of the image produced by the temperature source with that of a reference temperature lamp.

The optical pyrometer has an eyepiece at one end and an objective lens on the other end. In between objective lens and standard lamp (Reference temperature lamp), an absorption filter is placed and it is used to increase the range of temperature.

A red filter is placed between eyepiece and the standard lamp which allows only a narrow band of wavelength.

A battery, ammeter and rheostat are connected to a standard lamp.

A source temperature to be measured is focused onto the standard lamp using the objective lens.

An absorption filter at the front of the device reduces the intensity of the incoming radiation so that the standard lamp may be operated at low level.

The red filter is fixed in the eyepiece to ensure that comparisons are made with monochromatic radiation.

Finally, the current flowing through the lamp is measured by using the ammeter and it is the temperature of the source when it is calibrated with temperature equivalent. 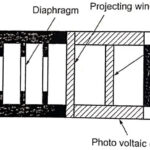 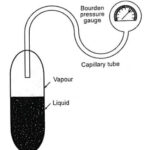