In this chapter, we shall discuss the static and dynamic force analysis of planar mechanisms in detail.

In our studies of “Kinematics of Machinery“, we limited ourselves to consideration of the geometry of the motions and of the relationships between displacement and time. But the force required to produce those motions were not considered.

In the design of machine mechanisms, it is very essential to know the magnitudes and the directions of forces transmitted from the input to the output. We know that all machine members are subjected to different types of forces such as forces due to external loads, forces due to combustion of fuels, forces due to friction forces, forces due to change of temperatures, spring forces, impact forces, inertia forces, etc. Thus force analysis helps the designer in selecting proper sizes of the machine components to withstand the stresses developed in them.

The necessary and sufficient conditions for the static equilibrium of a body are:

Mathematically, these two conditions are expressed as
ΣF = 0; and ΣM = 0

The above expression is also known as equations of equilibrium. In a planar system, it is convenient to resolve the forces along two mutually perpendicular directions x and y. Then the equation of equilibrium can be written as 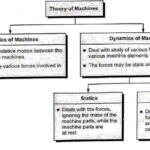 Theory of Machines and Branches – Dynamics of Machinery 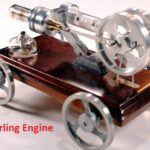