It consists of a spring loaded vacuum diaphragm linked to a tapered valve. A vacuum chamber is there at the top of the valve. This valve
controls the passage for the exhaust gas. The chamber is connected by a tube to a vacuum port in the throttle body.

When there is no vacuum at this port, the spring will push the diaphragm down and keep the passage closed. Therefore, no exhaust gas recirculation. It happens during idle, when NO2 formation is at a minimum. Also EGR could stall an idling engine.

When the throttle is opened from the idle position, vacuum applied will gradually open the tapered valve. It causes the exhaust gas to flow into the intake manifold. At wide open throttle, the intake manifold vacuum is low and the EGR valve is closed by the spring.

Thus, EGR valve systems do not affect full power operation. It is thus seen that exhaust gas is recirculated only in this system when the engine operating conditions are from NO2.

Treating the exhaust gas means some cleaning or reducing the percentage of pollutants in it. It takes place after leaving the exhaust gas
from the engine cylinders and before it exits the tailpipe and enters the atmosphere.

Air Injection System : The main parts of an air-injection system are the air pump, one way check valve and piping into the exhaust manifold. The air pump is driven by a belt from the crank shaft pulley. When the engine is cold, air is supplied to exhaust manifold. This fresh air supplies excess oxygen to oxide of HC and CO into CO2 and water vapour. 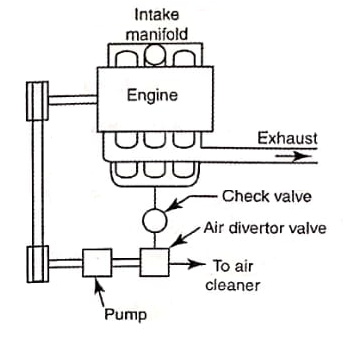 High manifold vacuum draws rich mixture from the carburetor. It is too difficult to ignite in the combustion chamber due to which reasons, it
goes out in the exhaust manifold.

When air is pumped into exhaust manifold, the mixture becomes lean. It would ignite when hot exhaust gases are released from the next cylinder. This may result in back firing.

To prevent this, the diverter valve diverts the fresh air from exhaust manifold during deceleration. Check valve is meant to prevent back flow whenever exhaust pressure is greater than air pump pressure.

Catalytic converter : The catalytic converter converts the pollutants like HC, CO and NO2 into harmless gases. It is placed between exhaust manifold and silencer. It contains the plastic pallets coated with the catalyst.

All exhaust gas must flow through it. The catalyst causes a chemical change without being a part of the chemical reaction. The catalytic
converter may have two different catalysts. One catalyst treats the HC and CO. The other treats NO2.

The catalyst encourages the HC and CO to unit with oxygen to become H2O and CO2. This type of converter is known as oxiding converter because it oxidizes the HC and CO. The metal platinum and palladium are used as oxidizing catalysts.

The catalyst for NO2 splits the oxygen from the NO2. The NO2 becomes harmless nitrogen and oxygen. This type of converter is known as
reducing converter. The metal rhodium is used as reducing catalyst.

Vehicles with catalyst converter must use unleaded petrol. Lead in petrol coats the catalyst and makes it ineffective. For the catalytic converter to the most effective, the air fuel mixture must have stoichiometric ratio of 14.7: 1. 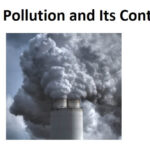 Air Pollution and Its Control – theteche.com 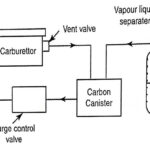