Types of vibration may be classified according to :

According to the Actuating Force

Note : Deterministic and random vibrations – In the vibratory system, if the amount of external excitation is known in magnitude, it causes deterministic vibration.

On the contrary, the non-deterministic vibrations are known as random vibrations.

In real systems, the amplitude of vibration decays continuously because of damping and vanishes finally. Such vibrations in real system are called transient vibrations.

According to Motion of System with Respect Axis

Consider a vibration body e.g,. a rod, shaft or spring. Image shows a heavy disc carried on one end of a weightless shaft, the other end being fixed. This system can execute any one of the following types of vibrations.

When the particles of the shaft or disc moves parallel to the axis of the shaft, then the vibrations are known as longitudinal vibrations, as shown in Fig (a).

Note : In the above three types of vibrations, the acceleration is directly proportional to the displacement and it acts toward the equilibrium position. Thus these three vibrations execute simple harmonic motion (SHM). 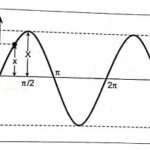 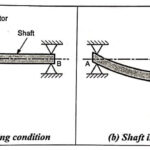