At critical speeds, the amplitude of vibration of rotors is excessively large and a large amount of force is transmitted to the bearings or foundations. The system may even fail because of violent nature of vibrations in the transverse direction. Therefore, it is important to find the natural frequency of the shaft to avoid the occurrence of critical speeds.

Causes of the Critical Speeds of Shafts

The critical speed may occur due to one or more of the following reasons:

When a rotor (say, a gear or a pulley) is mounted on a stationary shaft, its centre of gravity does not usually coincide with the centre line of the shaft (axis of the shaft), as shown in Fig (a). Therefore, when the shaft rotates, it is subjected to a centrifugal force. This force makes the shaft bend in the direction of eccentricity of the centre of gravity. This further increases the eccentricity, and hence the centrifugal force. In this way, the effect is cumulative and ultimately the shaft may even fail. The bending of shaft not only depends upon the value of eccentricity but also depends upon the speed at which the shaft rotates.

Thus the speed at which the shaft tends to vibrate violently in the transverse direction is known as critical or whirling speed.

Consider a shaft of negligible mass carrying a rotor in between two bearings A and B, as shown in Fig (a). Fig (b) shows the shaft when rotating at a uniform speed of ω rad/s about the axis of rotation.

Let point O is on the shaft axis, O1 is geometric centre of rotor and ‘G’ is the centre of gravity of rotor.

As shown in fig (b), the two forces acting on the rotor when it is rotating, are:

Thus, when ω = ωn, the deflection y is infinitely large (and resonance occurs) and the speed ω is the critical speed.

If Ncr is the critical whirling speed in r.p.s., then

where δ = Static deflection of the shaft.

Hence the critical or whirling speed of the shaft in r.p.s. is equal to the natural frequency of transverse vibrations in Hz. 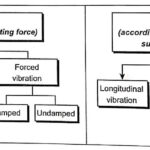 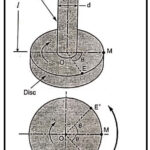