In the following sections, the frequency of transverse vibrations of various systems and the phenomenon of whirling speed have been discussed.

Consider a shaft of negligible mass, whose one end is fixed and the other end carries a body of weight W, as shown in Fig (a). Fig (b) shows all three positions: (i) unconstrained position, (ii) mean or equilibrium position, and (iii) position after time ‘t’. The various forces acting on the mass are shown in Fig (c).

Effect of Inertia of the Constraint in Transverse Vibrations 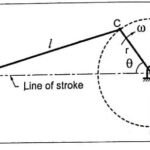