Tactile pressure sensors are used to detect the pressure distribution between a sensor and a target. They are often used on the robot grippers or flat tactile arrays to identify whether the finger is in touch with the target object or not. These sensors are also used in touch screen display of laptops, ATM machines, mobiles etc. Most tactile pressure sensors use resistive-based technologies where the sensor acts as a variable resistor in an electrical circuit. A small deflection of the diaphragm causes implanted resistors to exhibit a change in resistance value. The sensor converts this change in resistance into a voltage that is interpreted as a continuous and linear pressure reading. When tactile pressure sensors are unloaded, their resistance is very high. When force is applied, their resistance decreases. Pressure sensitive film is used to create a direct, visual image of the pressure distribution. Active pressure sensor arrays consist of multiple sensing elements packaged in a single sensor.

Fig shows another form of tactile sensor. It uses piezoelectric material of poly-vinylidene fluoride (PVDF) film. Two layers of PVDF films are used and they are separated by a soft film which transmits vibrations. When the alternating voltage is supplied in the lower PVDF film it results in mechanical oscillations of the film. The intermediate film transmits these vibrations to the upper PVDF film. Due to the piezoelectric effect the vibrations formed cause an alternating voltage to be produced across the upper film. So, pressure is applied to the upper PVDF film and its vibrations affects the output voltage. 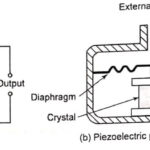 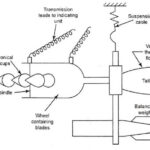 Current Meter is Used to Measure