Manometers is the device which is used for measuring the pressure at a point in a fluid by balancing the column of fluid by the same or another column of liquid.

Simple manometers are used to measure the pressure at a point in a fluid contained in a pipe or a vessel. It consists of a glass tube having one of its end connected to a point where the pressure is to be measured and other end remains open to atmosphere.

A piezometer is the simplest form of manometers which can be used for measuring moderate pressure of liquids. It consists of a glass tube in which one end is connected to the wall of the pipe or a vessel and the other end is open to the atmosphere as shown in figure.

w = Specific weight of the liquid.

Piezometers measure gauge pressure only since the surface of the liquid in the tube is subjected to atmospheric pressure. Piezometers are not suitable to measure vacuum pressures.

Piezometers cannot be employed when large pressures in the lighter liquids are to be measured, since it would require very long tubes which cannot be handled conveniently. Furthermore, gas pressures cannot be measured by Piezometers because a gas forms no free atmospheric surface. These limitations can be overcome by the use of U-tube manometers.

For gauge pressure : Let A be the point at which the pressure is to be measured. X-X is the datum line.

When the pressure in the tube is same as atmospheric pressure, the pressure above the horizontal datum line X-X in the left column should be same as in the right column. 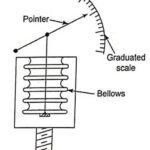