The second law of thermodynamics is stated in two ways.

The Kelvin Planck statement can be expressed as “It is impossible for any device that operates on a cycle process to receive heat from a single reservoir and produce an equivalent amount of work”.

The Kelvin Planck statement can also be expressed as no heat engine can have a thermal efficiency of 100 percent.

The Clausius statement is expressed as “It is impossible to construct an operating device working on a cyclic process which produces no other effect than the transfer of energy as heat from a low temperature body to a high temperature body”.

Entropy is an index of unavailability or degradation of energy. It can also be stated, it is a measure of molecular disorder or random function of a system process. It can be created but it cannot be destroyed. Heat always flows from hot body to cold body and thus it becomes lesser value available. This unavailability of energy is measured by entropy. It is an important thermodynamics property of the working substance. It increases with the addition of heat and decreases with its removal. It is the function of quantity of heat with respect to temperature. We are usually interested in change in entropy. The change in entropy for reversible process is mathematically given by

Unit of entropy is kJ/K or J/K

The change in entropy of a system during a process can be determined by integrating the above equation between initial and the final states:

Note : For reversible adiabatic process change in entropy is zero. 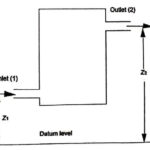 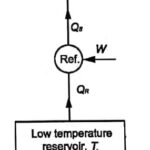