The relational model represents the database as a collection of relations. Informally, each relation resembles a table of values or, to some extent, a flat file of records. It is called a flat file because each record has a simple linear or flat structure. For example, the database of files that was shown in Figure is similar to the basic relational model representation. However, there are important differences between relations and files, as we shall soon see.

When a relation is thought of as a table of values, each row in the table represents a collection of related data values. A row represents a fact that typically corresponds to a real world entity or relationship. The table name and column names are used to help to interpret the meaning of the values in each row. For example, the first table of is called STUDENT because each row represents facts about a particular student entity. The column names Name, Student_number, Class, and Major specify how to interpret the data values in each row, based on the column each value is in. All values in a column are of the same data type.

In the formal relational model terminology, a row is called a tuple, a column header is called an attribute, and the table is called a relation. The data type describing the types of values that can appear in each column is represented by a domain of possible values. We now define these terms domain, tuple, attribute, and relation formally.

A domain D is a set of atomic values. By atomic we mean that each value in the domain is indivisible as far as the formal relational model is concerned. A common method of specifying a domain is to specify a data type from which the data values forming the domain are drawn. It is also useful to specify a name for the domain, to help in interpreting its values. Some examples of domains follow:

The preceding are called logical definitions of domains. A data type or format is also specified for each domain. For example, the data type for the domain Usa_phone_numbers can be declared as a character string of the form (ddd)ddddddd, where each d is a numeric (decimal) digit and the first three digits form a valid telephone area code. The data type for Employee_ages is an integer number between 15 and 80. For Academic_department_names, the data type is the set of all character strings that represent valid department names. A domain is thus given a name, data type, and format. Additional information for interpreting the values of a domain can also be given; for example, a numeric domain such as Person_weights should have the units of measurement, such as pounds or kilograms.

A relation of degree seven, which stores information about university students, would contain seven attributes describing each student. as follows:

Using the data type of each attribute, the definition is sometimes written as:

For this relation schema, STUDENT is the name of the relation, which has seven attributes. In the preceding definition, we showed assignment of generic types such as string or integer to the attributes. More precisely, we can specify the following previously defined domains for some of the attributes of the STUDENT relation: dom(Name) = Names; dom(Ssn) = Social_security_numbers; dom(HomePhone) = USA_phone_numbers3, dom(Office_phone) = USA_phone_numbers, and dom(Gpa) = Grade_point_averages. It is also possible to refer to attributes of a relation schema by their position within the relation; thus, the second attribute of the STUDENT relation is Ssn, whereas the fourth attribute is Address.

A relation (or relation state) r of the relation schema R(A1, A2, …, An), also denoted by r(R), is a set of n-tuples r = {t1,t2,…, tm}. Each n-tuple t is an ordered list of n values t =<v1,v2,…,vn>, where each value vi, 1 ≤ i ≤ n, is an element of dom (Ai) or is a special NULL value. (NULL values are discussed further below) The ith value in tuple t, which corresponds to the attribute Ai, is referred to as t[Ai] or t.Ai (or t[i] if we use the positional notation). The terms relation intension for the schema R and relation extension for a relation state r(R) are also commonly used.

Figure shows an example of a STUDENT relation, which corresponds to the STUDENT schema just specified. Each tuple in the relation represents a particular student entity (or object). We display the relation as a table, where each tuple is shown as a row and each attribute corresponds to a column header indicating a role or interpretation of the values in that column. NULL values represent attributes whose values are unknown or do not exist for some individual STUDENT tuple.

The earlier definition of a relation can be restated more formally using set theory concepts as follows. A relation (or relation state) r(R) is a mathematical relation of degree n on the domains dom(A1), dom(A2), …, dom (An), which is a subset of the Cartesian product (denoted by ×) of the domains that define R:

In general, as the state of the real world changes, so does the relation state, by being transformed into another relation state. However, the schema R is relatively static and changes very infrequently for example, as a result of adding an attribute to represent new information that was not originally stored in the relation.

The earlier definition of relations implies certain characteristics that make a relation different from a file or a table. We now discuss some of these characteristics.

Ordering of Tuples in a Relation. A relation is defined as a set of tuples. Mathematically, elements of a set have no order among them; hence, tuples in a relation do not have any particular order. In other words, a relation is not sensitive to the ordering of tuples. However, in a file, records are physically stored on disk (or in memory), so there always is an order among the records. This ordering indicates first, second, ith, and last records in the file. Similarly, when we display a relation as a table, the rows are displayed in a certain order.

Tuple ordering is not part of a relation definition because a relation attempts to represent facts at a logical or abstract level. Many tuple orders can be specified on the same relation. For example, tuples in the STUDENT relation in Figure could be ordered by values of Name, Ssn, Age, or some other attribute.

The definition of a relation does not specify any order: There is no preference for one ordering over another. Hence, the relation displayed in Figure is considered identical to the one shown in Figure. When a relation is implemented as a file or displayed as a table, a particular ordering may be specified on the records of the file or the rows of the table.

Ordering of Values within a Tuple and an Alternative Definition of a Relation. According to the preceding definition of a relation, an n-tuple is an ordered list of n values, so the ordering of values in a tuple and hence of attributes in a relation schema is important. However, at a more abstract level, the order of attributes and their values is not that important as long as the correspondence between attributes and values is maintained.

An alternative definition of a relation can be given, making the ordering of values in a tuple unnecessary. In this definition, a relation schema R = {A1, A2,…, An} is a set of attributes (instead of a list), and a relation state r(R) is a finite set of mappings r = {t1,t2,…,tm}, where each tuple ti is a mapping from R to D, and D is the union (denoted by ∪) of the attribute domains; that is, D = dom(A1) ∪ dom(A2) ∪ … ∪ dom(An). In this definition, t[Ai] must be in dom(Ai) for 1 ≤ i ≤ n for each mapping t in r. Each mapping ti is called a tuple.

According to this definition of tuple as a mapping, a tuple can be considered as a set of (<attribute>,<value>) pairs, where each pair gives the value of the mapping from an attribute Ai to a value vi from dom(Ai). The ordering of attributes is not important, because the attribute name appears with its value. By this definition, the two tuples shown in Figure are identical. This makes sense at an abstract level, since there really is no reason to prefer having one attribute value appear before another in a tuple.

When a relation is implemented as a file, the attributes are physically ordered as fields within a record. We will generally use the first definition of relation, where the attributes and the values within tuples are ordered, because it simplifies much of the notation. However, the alternative definition given here is more general.

An important concept is that of NULL values, which are used to represent the values of attributes that may be unknown or may not apply to a tuple. A special value, called NULL, is used in these cases. For example, in Figure, some STUDENT tuples have NULL for their office phones because they do not have an office (that is, office phone does not apply to these students). Another student has a NULL for home phone, presumably because either he does not have a home phone or he has one but we do not know it (value is unknown). In general, we can have several meanings for NULL values, such as value unknown, value exists but is not available, or attribute does not apply to this tuple (also known as value undefined). An example of the last type of NULL will occur if we add an attribute Visa_status to the STUDENT relation

that applies only to tuples representing foreign students. It is possible to devise different codes for different meanings of NULL values. Incorporating different types of NULL values into relational model operations has proven difficult and is outside the scope of our presentation.

The exact meaning of a NULL value governs how it fares during arithmetic aggregations or comparisons with other values. For example, a comparison of two NULL values leads to ambiguities if both Customer A and B have NULL addresses, it does not mean they have the same address. During database design, it is best to avoid NULL values as much as possible. 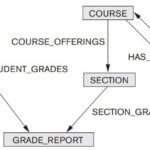